Things to Do in Hawaii

View of the beaches in Waikiki.

Example of Things to Do in Hawaii

Interested in traveling to the Aloha State and wondering about interesting things to do in Hawaii? Been to the Aloha State before or looking into your very first trip? Don’t fret. There are thousands of places to go, sites to see and unique activities to participate in. If you don’t have anything in mind yet, don’t worry. For those of you who aren’t sure what sort of locale to pick, we have a list of some of the top things to do in Hawaii.

Oahu’s Waikiki famous white-sand beach spans an area of 3.4 square miles. It is home to a truly incredible array of hotels, restaurants, theaters and shops, all within walking distance from the shore. Visitors to Waikiki have access to an almost endless amount of sites to see. Examples include: Fort DeRussy, Kahanamoku Lagoon and Kapi’olani Park. It’s no surprise that it’s so easy to spend a day, weekend, or even an entire vacation in and around Waikiki. For many travelers, spending time in Waikiki may be the one of the top things to do in Hawaii.

If you’re a history buff, stop at Fort DeRussy, a United States military reservation. The reservation features beautifully landscaped grounds. But the most interesting part of Fort DeRussy is the U.S. Army Museum of Hawaii, housed in the former Shore Battery Randolph. The area was originally a Rest and Recuperation site for servicemen during the Vietnam War. It is now home for a wide range of historic exhibits. The museum’s collection includes an AH-1 Cobra helicopter, World War II armored vehicles and the battery itself. The Museum is open Tuesday through Saturday and admission is free.

If you’re looking for a relaxing outing, the Duke Kahanamoku Lagoon is an excellent choice. The lagoon is a man-made body of water, first developed in the 1950s. The lagoon was named after Olympic swimming champion and “Father of Modern Surfing” Duke Kahanamoku. In 2006, the lagoon was renovated, adding a board walk, palm trees and a small island. Since its renovation, the pond has once again become a popular place for swimming. This lagoon’s small size and shallow waters make it ideal for families with small children.

On the east end of Waikiki, just past Kuhio Beach Park, is the Kapi’olani Regional Park. The park spans over 300 acres and became a public park on June 11, 1877. This makes it the oldest and largest public space in Hawaii. The park is named after Queen Kapi’olani. She was the Queen Consort to King David Kalākaua, the last reigning king of the Kingdom of Hawaii. Today, the park is home to the Honolulu Zoo and the Waikiki Shell, a venue for outdoor concerts. The Honolulu Zoo is open from 9:00 am to 4:30 pm daily and features specifically-designed habitats for over 1,200 animals. Admission for adults, ages 13 and older is $14.00 and only $6.00 for children from ages 3 to 12. 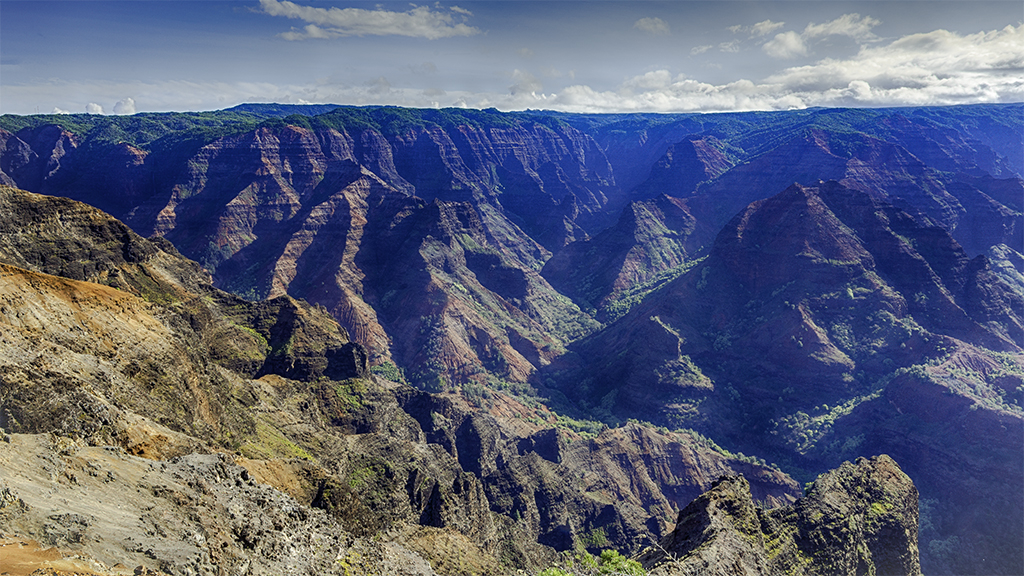 Waimea Canyon cuts a swath across the western side of Kauai a mile wide and iis 3,500 feet deep and ten miles long. Some have called it the “Grand Canyon of the Pacific.” But no matter what name you know it by, Waimea Canyon is an incredible destination for your Hawaii vacation.

A catastrophic, volcanic collapse on Kauai formed the canyon roughly 4 million years ago. Rainwater from nearby Mount Wai’ale’ale carved out the remainder of the canyon over thousands of years. Over that time, the exposed rock and basalt weathered to a bright red color. Today, the canyon is home to the Waimea River. The name Waimea actually comes from the Hawaiian word meaning “reddish water,” a reference to the canyon’s characteristic red soil.

Waimea Canyon State Park encompasses a little over 1,800 acres of the canyon and several hiking trails and lookouts. The trails in the area vary in difficulty, making it an excellent experience for novice and seasoned hikers alike.

Waimea Canyon is truly a sight to behold. The deep markings and bright colors on the inner walls are remnants of volcanic eruptions and lava flows. You’ll have the opportunity to experience a wide range of flora and natural beauty while on these trails.

While here, you must experience the Waimea Canyon Lookout. The lookout stands at 3,400 ft, just under half a mile north of the 10-mile marker. It offers a panoramic view of one of Hawaii’s most incredible geological wonders.

Visiting Kilauea Crater at Hawaii Volcanoes National Park, one of the most interesting things to do in Hawaii.

Volcanoes National Park encompasses more than 333,000 acres of land. It is home to Mauna Loa and Kilauea, two of the most active volcanoes in the world. Mauna Loa last erupted in 1984 and Kilauea has been steadily erupting since January 3, 1983. The park’s extraordinarily diverse, natural landscape earned it a World Biosphere designation in 1980 by UNESCO. In 1987 it also became a World Heritage Site.

Kilauea produces 250,000 to 650,000 cubic yards of lava every day. That’s enough to resurface a 20-mile long, two-land road on a daily basis. The continuous eruption, from both the summit and rift zones have added 491 acres of new land to Big Island. No one can say for sure when Kilauea’s eruption will finally come to a stop. It could be tomorrow. It could be 100 years from now. But no matter what, it is a truly incredible sight to see.

Mauna Loa and Kilauea aren’t the sole reason to visit the park. If you’d like to see the natural wonders created by lava, you should walk through the Thurston Lava Tube. Lava flows created it over about 500 years ago. This occurred when the exterior of the flow hardened but lava continued to flow in its interior. And it was left hallow when the flow stopped. Caves like this can range from only a few feet deep to miles long. And this is one of the largest and most accessible of its kind.

For a better understanding of the nature of the volcanoes, make a stop at the Thomas A. Jagger Museum of Volcanology. It displays working seismographs, equipment used to study volcanoes. It also has an interpretive exhibit about Kilauea. And it even showcases damaged gear of scientists who ventured a too close to the lava. The museum sits within perfect viewing distance of the nearby craters. This makes it the ideal viewing area when high levels of sulfur dioxide prevent visitors from getting much closer to the volcanoes.

For an unforgettable day of swimming, snorkeling and scuba diving in Hawaii’s beautiful ocean waters, head to Honaunau Bay on Big Island. One of the first things you’ll notice as you enter the bay area, are the lava rock-flats that line the inner shore. The large, black stones sit right at sea level and are an excellent vantage point to look out on the bay. It’s also a perfect spot to have a family picnic or to put on your snorkeling or scuba diving gear.

Close to shore, where the water’s depth is only 10 feet, sunlight easily reaches the sea floor. That sunlight helps to grow healthy coral. This, in turn, provides a home to thousands of colorful species of fish, unique to Hawaii. It’s that combination of shallow water and exotic fish that make the bay a wonderful place to snorkel.

Of course, if it’s a scuba diving experience you’re looking for, don’t worry. Just put on your tank, strap on your flippers and head out to the center of the bay. This is where the water’s depth reaches close to 100 feet. Honaunau Bay’s inner shoreline actually protects much of the area from larger coastal swells. This makes it perfect for novice as well as for expert-level scuba divers.

No matter what you choose to do here, visitors will have the opportunity to see all sorts of marine life.  Examples include: yellow tang, surgeon fish, moray eels, green sea turtles and sometimes even dolphins. 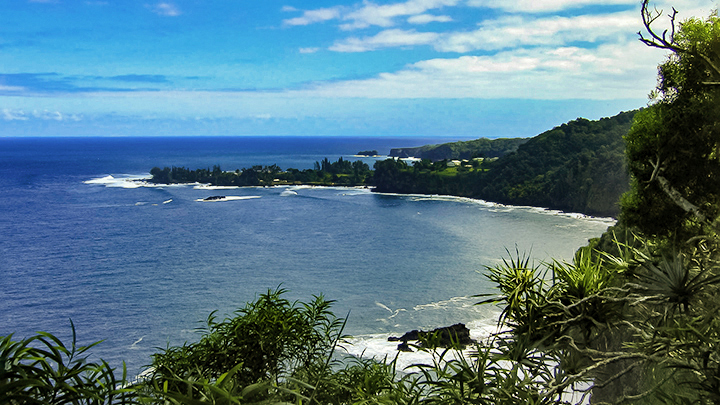 Enjoying the view from the Hana Highway, one of the most memorable things to do in Hawaii.

Does your list of things to do in Hawaii include a sight-seeing adventure? If so, you should fill your gas tank, pack a picnic lunch and drive up the famous road to Hana Village. You’ll go over historic bridges, pass many hairpin curves and enjoy views of Hawaii’s most iconic coastline.

Along the way, you can visit Maui’s Garden of Eden, a tremendous botanical garden and arboretum. Upon reaching Hana, you relax at Hana Bay or explore the black-sand beach at Wainapanapa State Park.

Past Hana, you and your family can swim under a waterfall, hike through a bamboo forest or even camp at Ohe’o Gulch. This  idyllic area is also known as the Seven Sacred Pools and is a part of Haleakala National Park.

Looking for a chance to visit a National Historic Landmark and one of most important places in American history? If so, consider planning a trip to Pearl Harbor and the USS Arizona Memorial.

The attack of Pearl Harbor and subsequent fallout marked the beginning of the United States’ participation in World War II. The Memorial stands as both a resting place and a reminder of the 1,177 USS Arizona crew members who died on the morning of December 7, 1941. Not surprisingly, this is one of the most popular things to do in Hawaii.

You will need to take a boat ride to visit the Arizona Memorial. Boat ride tickets are free. But there is only a limited amount of boat ride tickets available each day. So an early arrival will be important if you want to visit the memorial itself. The entire tour take about an hour and 15 minutes. It includes a documentary on the history of Pearl Harbor.

Pearl Harbor is also home to the World War II Valor in the Pacific National Monument, Battleship Missouri Memorial, Pacific Aviation Museum, and USS Bowfin Submarine Museum & Park. You can purchase tickets to all four of these attractions at the Visitor Center. And in the case of the USS Missouri and Pacific Aviation Museum, you can purchase tickets online.